Black History Month: From Ajegunle to Dublin, My Journey to Senior Software Engineer at HubSpot

No one expects so much from a kid born and raised in Ajegunle, at least that’s how I understood things as a kid growing up in a ghetto. I was lucky to have parents who were committed to protecting me and my siblings from a life that I was expected to be subject to. Looking back at my journey from growing up in the chaotic life of Ajegunle, to getting influenced by some historical black figures and joining HubSpot in July 2022, I’d love to reminisce on this fascinating journey and maybe encourage someone out there in a similar situation.

Nigeria (/naɪˈdʒɪəriə/), is home to the largest black nation in the world. Its population is estimated at 218.5 million people and it is one of the most linguistically diverse countries in the world, with over 500 different languages spoken.

Lagos (/ˈleɪɡɒs/) as we fondly call it Èkó, is the largest city in Nigeria and the second most populous city in Africa. The city can be described as the cultural, financial, and entertainment capital of Africa.

Ajegunle as fondly called “AJ City”, a neighborhood located in the heart of Lagos can be described by many as the birthplace for criminals and to others as a notorious slum - as it was referred to as the most disturbing ghetto in Nigeria in the 90s.

Born into an igbo christian family with three siblings, my dad was a mechanical engineer working with the Nigerian Port Authority and my mum a trader. Ajegunle was my home for nearly 16 years and as you may imagine, I was at a risk of engaging in social vices such as thuggery, cultism, armed robbery, and other criminal activity. And the sad reality is, I can only count a few of my childhood friends that made it out of that life. Me (left) with my twin brother at Idi street, Ajegunle, Lagos

While I lived in this “bubble” under the protection of my parents, I slowly began to take interest in reading books, exploring encyclopedias, and obsessively being creative and solving problems. I clearly remember myself as a 7-year-old, fixing everything that was broken in the house, having this large album of paintings and art drawings, and staying up late at night solving problems with my brothers and dad. 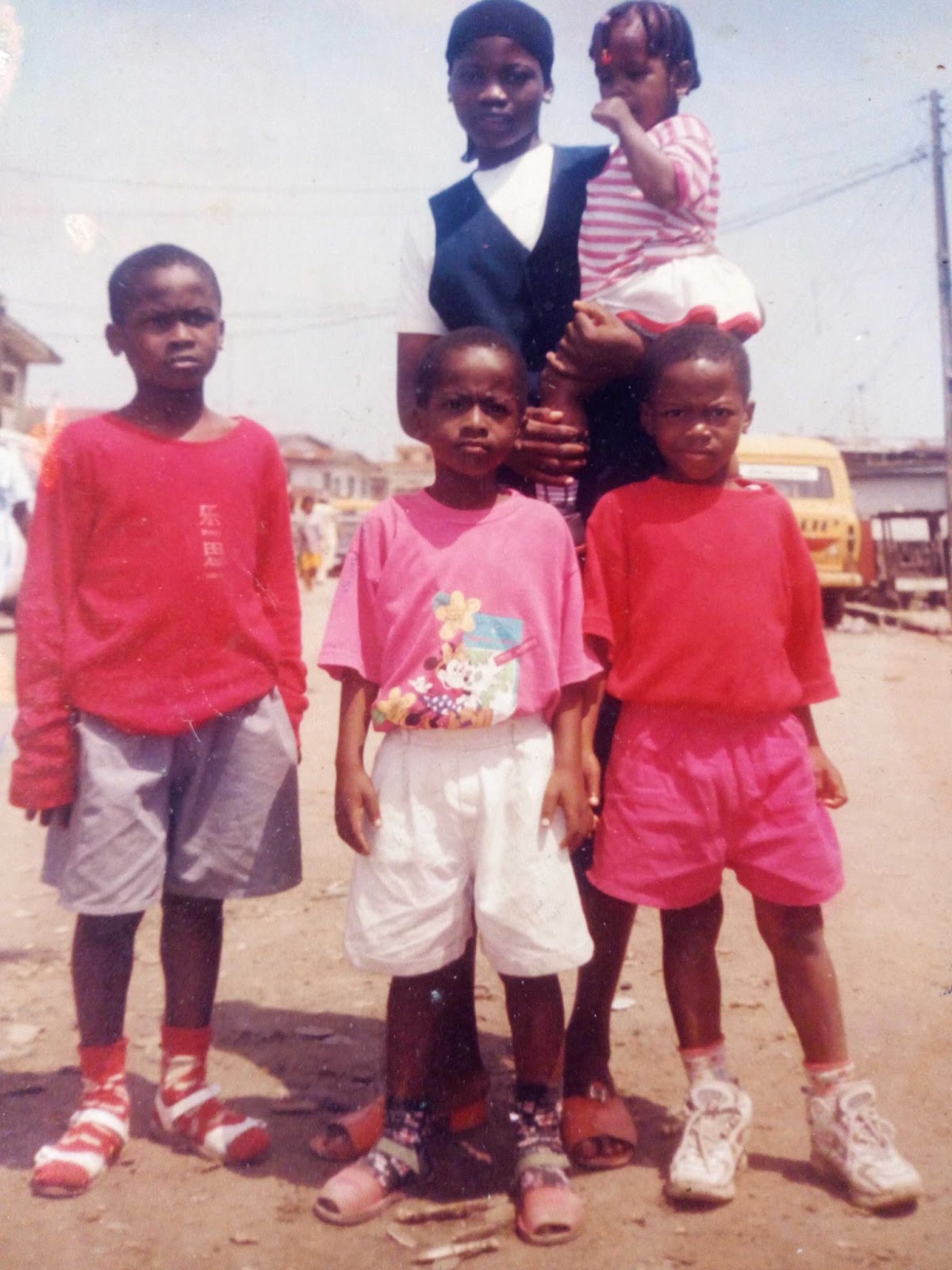 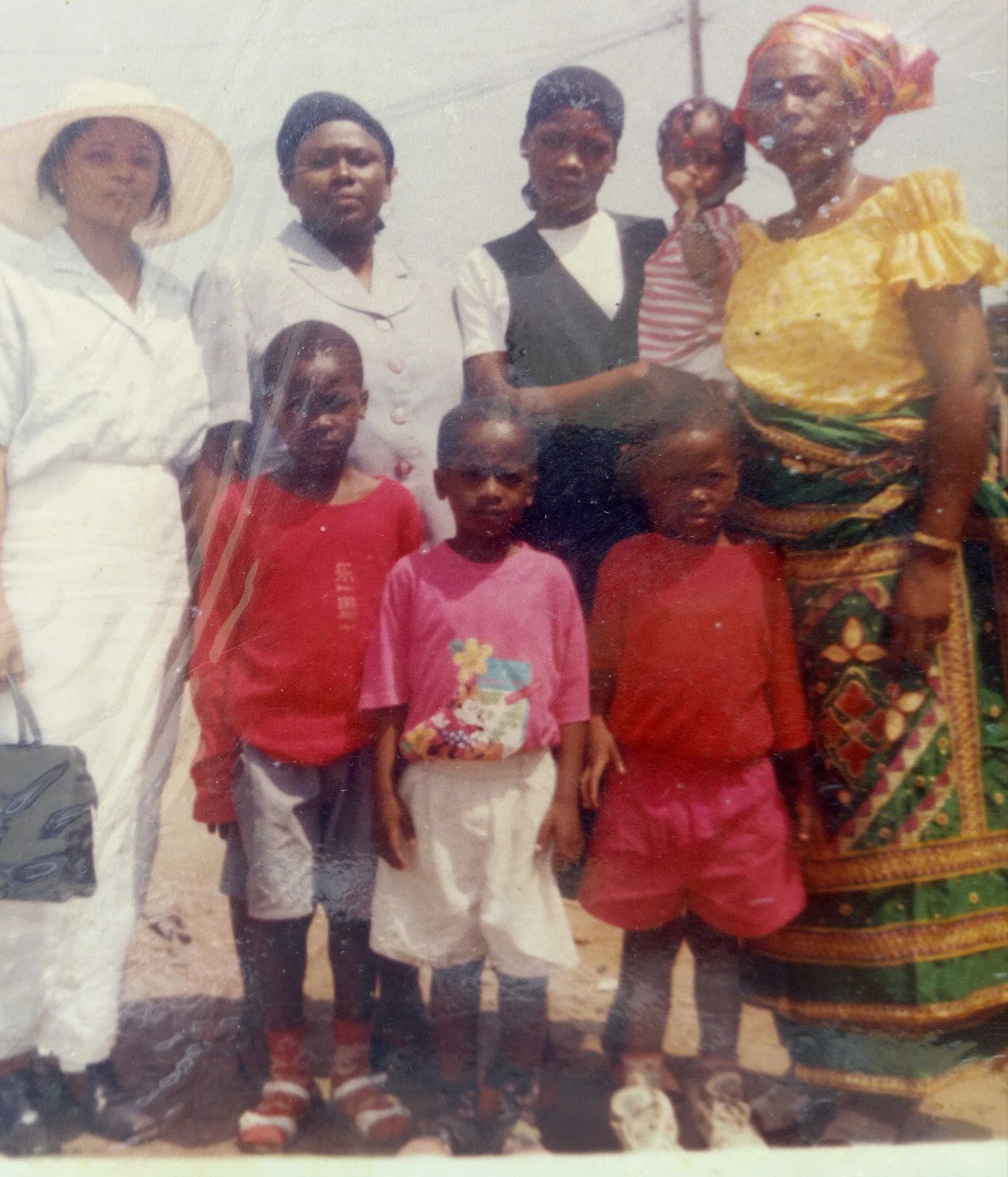 As I progressed through primary, secondary, and tertiary education, I grew fond of some notable black figures that went on to shape many aspects of my life. The likes of Dr. Ben Carson, who did some tremendous work in neurosurgery, Michael Jackson who went on to become the king of pop music in entertainment, Philip Emeagwali, a Nigerian computer scientist who won the 1989 Gordon Bell Prize for price-performance in high-performance computing applications, and Martin Luther King Jr, an activist who was one of the most prominent leaders in the civil rights movement to abolish institutional racial segregation, discrimination, and disenfranchisement throughout the United States - to name a few.

Through them, and many others like Chimamanda Ngozi Adichie and Ngozi Okonjo-Iweala, I saw myself and the entire black community represented on a global stage. They showed me what it meant to be black and stand out. All while going against all odds as a person of color to be successful at their life’s work and represent hope for a lot of people around the world - including me, living in a small ghetto somewhere in Africa. They helped me dare to dream big!

So I went on to hold a degree in computer science and become a software engineer, breaking new grounds and setting new standards for myself. Far, far away from the life anyone would expect from an “AJ boy”.

After spending time as a software engineer working with First bank of Nigeria, and then building a startup business and working with Interswitch Group, I was ready to step out of Africa and challenge myself away from home. But I had some questions and concerns:

With these questions and a lot more popping out of my head at an overwhelming rate, I knew I had to sort after the best places to work! And so I went to Glassdoor to review their credible annual publication of Best Places to work in 2022 and found the top 2 companies, Nvidia and HubSpot. So I applied to both, with fingers crossed!

Fortunately, I heard back from HubSpot, they wanted to interview me!

The interview process lasted three weeks and in all honesty, it was the best interview process I have ever experienced! Through the entire process the interviewers, in one way or another, displayed every quality of HubSpot’s values: HEART (Humble, Empathic, Adaptable, Remarkable, Transparent).

Throughout the process, they were 100% transparent with everything. I literally knew what to expect going into every interview down to the order of questions they would be asking. It did not only make me feel very comfortable but it also allowed me to effectively project my qualities and experience to the interviewers who were so professional.

To top it all off, I had an amazing recruiter, Karen, who was all in for me! It’s so beautiful to have the company that you’re interviewing with, also rooting for you. I made an appreciation post on LinkedIn to my recruiter a while back - you can read it here.

Now, it is important to note that I was interviewing the company as much as they were interviewing me. I had all of these questions listed above and I wanted to make sure HubSpot answered them. At this point after my interviews, I knew they were right for me. HubSpot walked the walk. I experienced everything people said about the company through reviews, and they were true. It was HubSpot or nothing at this point!

A couple of days after my final interview, I got a call from my recruiter and I was offered a position as a Senior Software Engineer. I lost my breath the whole time Karen was giving details about the offer. HubSpot made it possible for me to relocate to Dublin, Ireland! With so many perks including my favorite HubSpot’s global unlimited time off! I was even advised by HubSpot to consider spending some time with family before making my big move. Impressive!

I arrived in Dublin on 11th, July 2022 and as a foreign national and a person of color coming into Europe for the first time, I didn’t know what to expect. But my first day at HubSpot reiterated the fact that I made the right choice by choosing HubSpot. It was very eventful, and you can read a little about it here.

The first thing I noticed about HubSpot was the diversity, inclusion and how respectful everyone was to each other's views. There is literally a community for everything you identify with or are interested in including a Black community. I also had the opportunity to learn more about disablism in the workplace which was interesting to see how HubSpot tackles and supports it. 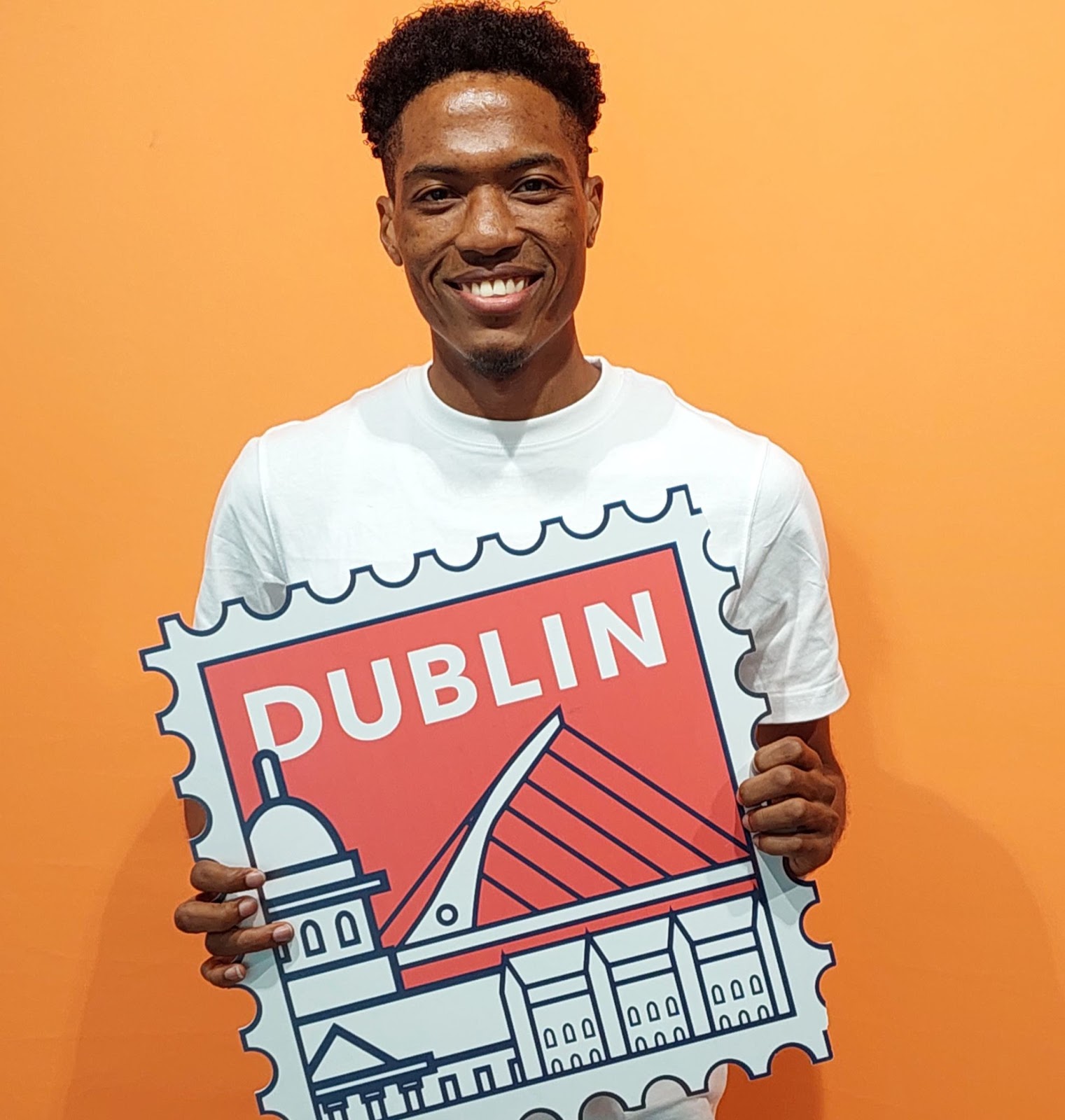 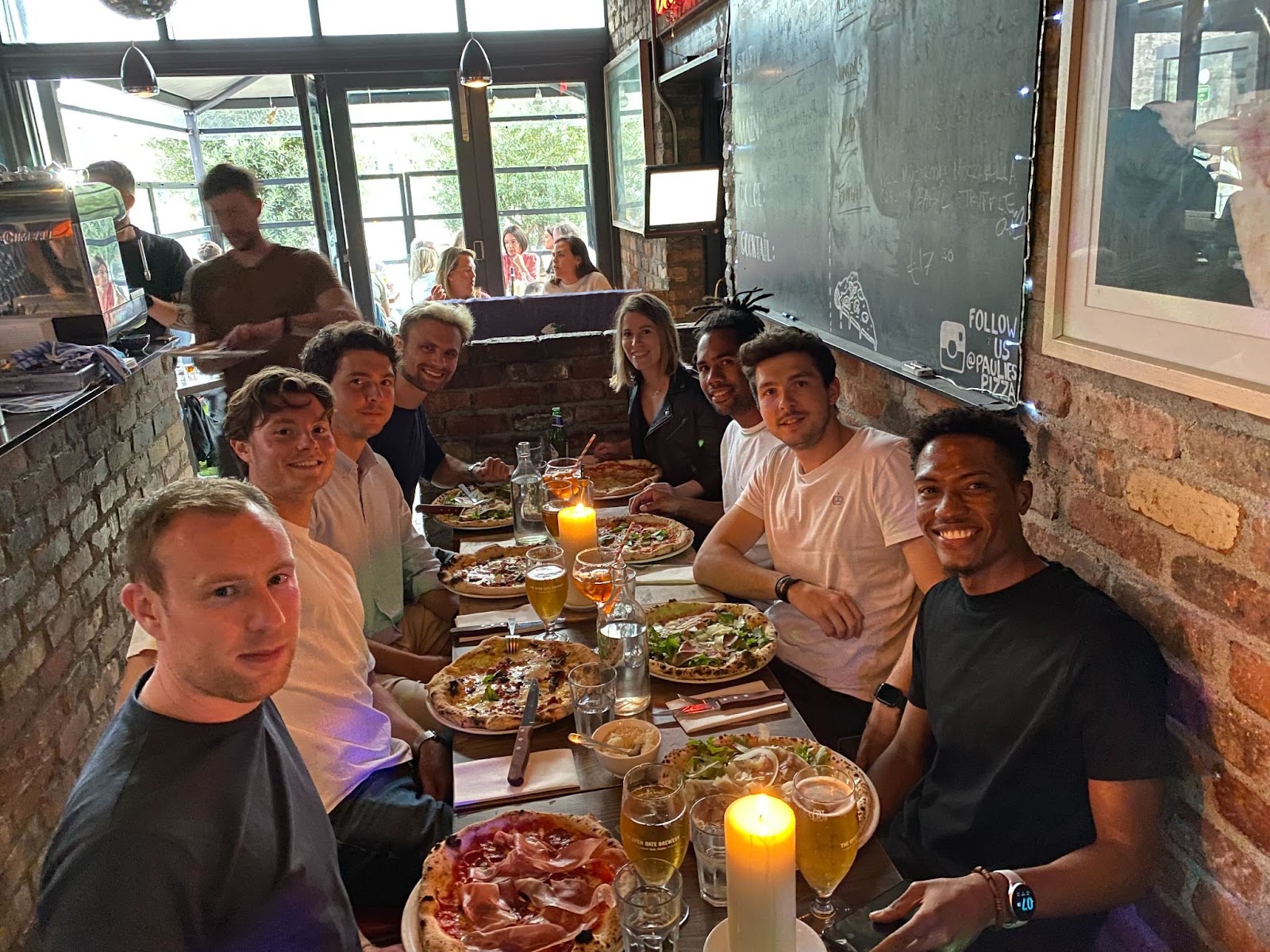 The tools used by HubSpot are out of this world. Not your regular engineering tools. As a software engineer, these tools are built for your success and productivity. They are so efficiently automated that I can focus on my primary tasks and deliver the most optimal and reliable solutions every time. I also found documentation as a standout impression at HubSpot. There’s literally documentation for everything, and you almost never have to raise a support ticket because every challenge has a solution documented somewhere in over seven different resources - that I can currently think of.

I personally find it fascinating that everyone is just happy to be at work. The work-life balance at HubSpot is so top notch that no one feels too overwhelmed or exhausted. And, there are strategies and resources put in place to help employees if that should ever happen. At this point, I could keep going on and on and on…

From Ajegunle To Dublin

So who am I? I’m a black kid born and raised in a ghetto in Nigeria who through love, commitment, resilience, motivation, and inspiration from my family and black heroes, past and present, made something out of myself and was given a fair chance to build a career at the 2nd best place to work in the world!

As Dr. Benjamin Carson would quote “It does not matter where we come from or what we look like. If we recognize our abilities, are willing to learn and use what we know in helping others, we will always have a place in the world.”.

If you're interested in having your own journey to HubSpot like Smart, check out our open positions here.

How I Got Into Tech: Product Manager Ryan DiPetta

On our careers site, we encourage candidates to tell imposter syndrome to take the day off — in other words, don't let a confidence gap, or a lack of ...
Francesca McCaffrey (She/Her)
on Aug 11, 2021
CultureProductProduct Management

How I Got Into Tech: Senior Product Manager Maggie Brenner

On our careers site, we encourage candidates to tell imposter syndrome to take the day off — in other words, don't let a confidence gap, or a lack of ...
Ashlee Gerow
on Feb 9, 2022
CultureProductProduct Management

Meet Frank Roméu, Senior Product Designer at HubSpot. He started his career in retail sales and customer service in Miami, and after visiting a ...
Erika Cote
on Oct 6, 2022
Engineering

HubSpot has use cases where many threads in a single process need to coordinate to find the most frequent items in a high cardinality data stream. In ...
Chris McKenna
on Aug 1, 2022
CultureEngineering

Meet Frank Roméu, Senior Product Designer at HubSpot. He started his career in retail sales and customer service in Miami, and after visiting a ...
Erika Cote
on Oct 6, 2022