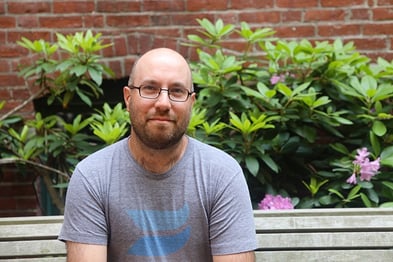 What song is stuck in your head these days? Music is a big deal to me and it constantly fuels my work. The best album I’ve heard so far in 2015 comes from a new band from Ipswich, UK called War Waves. I recommend the track “Trophy Life”.

How do you like your coffee? Hand me the cone of shame because I’m a tea drinker. Nothing fancy—black tea, no cream or sugar, steeped until the cup is empty. Rinse and repeat all the live long day.

What’s one thing most people don’t know about you? Hm, how about a couple things? First, I recently started recording music after taking a decade off. Second, I created an alternate baseball Hall of Fame populated by a mathematical formula (because I’m a baseball history and stat nerd.)

Now, down to business. How did you become a designer at HubSpot?

I actually joined HubSpot in December of 2013 in a somewhat experimental role. I tend to bridge the gap between design and development and I was brought in to do just that for the social media team.

At HubSpot, professional growth is taken very seriously. I’ve taken turns expanding on both sides of my skill set—getting deeper into the implementation side of things and then getting more involved in product design. I’ve enjoyed both, but been more comfortable expanding on the product design side. Fast forward to today and I’m the product designer for social and for a new product we’re working on (and planning to announce at INBOUND.)

Chase Oliver, the original product designer on social, showed me that good product design goes way beyond the screens and interface elements you’re building. You have to think deeply about the user—like, what their job is and what percentage of their day is spent doing the job your app helps them do. For me, this was a bit of a wake-up call. Social was all I worked on, so it was naturally a big deal to me. But our customers were often one-person marketing teams and only had about twenty minutes to dedicate to social each day. Social media was overwhelming to them and they didn’t know how to be effective in such a short amount of time. Through copious amounts of user research, we identified what our customers needed to do in social to be successful. We focused our efforts on improving those tasks and workflows. We called it the Social Media Daily Checklist.

But the nice thing about HubSpot is there are a ton of bright people everywhere. One of my strongest held design principles came from Jeff Dwyer, a backend developer I worked with on social (and had previously worked with—he was the one who brought me to HubSpot.) When building our Social Media Reports, he was insistent on never showing numbers without providing context that explains what the numbers mean. There are many ways to show this context, such as how well the user is doing compared to their previous performance or the performance of other customers like them. Our social reporting ended up not only showing statistics, but telling a story.

What was your proudest moment at HubSpot so far?

I think the proudest moments have been product launches. I touched upon the social reporting launch above and wrote about it in detail previously on this blog. The Inbox launch was also a big deal for me. We took a bit of a design gamble there, spending a large amount of effort on a feature users weren’t really explicitly asking for. But once they started using it, it was obvious to them that it was the feature that tied the whole social product together.

What’s your favorite part of the Culture Code and why?

Slide 51 references how HubSpot offers “the autonomy to be awesome.” This is what brought me into HubSpot. I’m a huge fan of shipping. Designing and building is fun, but it is most fun when it is an interactive experience with your customers. HubSpot gives me the freedom—every day—to have ideas, try things, and see how they work. It’s okay if something isn’t perfect the first time. The goal is to learn from that and make it awesome by the time it is released to all users.

But a part of the Culture Code that hits particularly close to home for me begins on slide 11. The deck talks about how “people have dramatically changed how they live and work.” It then shows the workplace evolving from “Office” to “Wherever” and the hours going from “9-5” to “Whenever.” This is a big deal for me because I live in the mountains of New Hampshire, over 70 miles from the office. I commute in two days per week and work from home the rest of the time. My tech lead works from Alabama (and comes to visit us once per month). If we were required to be in the office every day, neither of us would be working at HubSpot. HubSpot’s flexibility on the workplace opens us up to a much wider pool of candidates.

That said, I’ll be looking to hire a front-end developer for my team sometime within the next few months. I don’t have to consider only candidates who live in the Cambridge area or are willing to relocate close-by. Because our team is already remote, I can look for a kickass candidate anywhere. If you think that’s you, I’d love to talk to you! I’m adarowski@hubspot.com.

That's all from our mover and maker this week, but you can follow Adam here. Stay tuned for our next profile and check out Síle Brehony's in case you missed it!

Last fall at HubSpot, we started to experiment with React and Flux as the foundation for the future of our web products. Having experienced the ...
Colby Rabideau
on Feb 25, 2015
Culture

A few months ago, we really started to think about how we can scale our product team long-term. Engineers, designers, and product managers are hard ...
Hannah Fleishman (she/her)
on Jul 23, 2015