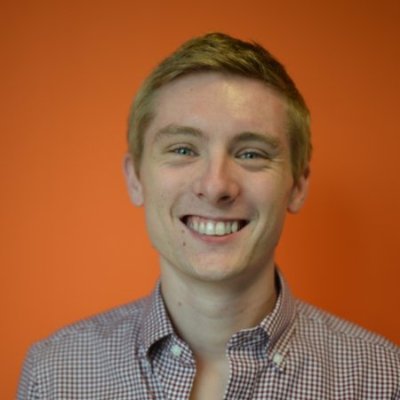 Last book you read:  The Innovator’s Dilemma. In the early stages of Leadin we spent a lot of time reimagining inbound marketing and exploring how we could make it accessible to everyone. This book is all about disruption so it was a great resource along the way.

What made you want to become an engineer?

My aunt works in Germany and she would bring her laptop back to Ireland with her over the holidays. That was the first computer I ever touched and she could tell I was enamoured with it. She encouraged my parents to get me one so when I was about seven, they bought me a used computer from an internet cafe. I spent a tremendous amount of time on it and quickly became the kid everyone on our street came to when they couldn’t log in. I started a computer repair side business, the whole works. Then when I was 15, one of our neighbors offered me a summer job doing internal tech support at a nationwide bank where he was the head of IT. I ended up working there over a few summers and on some weekends, and became more and more adept with how their systems worked.

The best part was that this was the only bank in Ireland that was open on Saturdays and when I was 17, they gave me the responsibility of handling all internal support for 10 branches. I was the only tech support available on Saturdays for the whole country. That was my first taste of working in tech and the autonomy that’s possible, and when it was time to look into universities, I knew I wanted to study computer science. So, I applied to Trinity College and went there for my undergraduate and masters.

How did you get to HubSpot?

I had been working at Microsoft for about two and a half years when I found HubSpot (or, when HubSpot found me). At the time, I was on a team that built the marketplace for Microsoft Office and it was an interesting team: About half of us were fresh out of college and the other half were seasoned veterans. I liked working at a big respectable company with decades of tech history, but the team moved slower at shipping product than I wanted.

I started going to tech meetups in Dublin to get a sense of what else was out there. I met Whitney (our VP of Platform Infrastructure) at an event and he invited me to HubSpot’s office for a beer. That beer turned into an interview and we ended up having dinner a bunch of times while he was in town from Boston. Talking to him about how much HubSpot cares about engineering and the type of people I’d be working with got me hooked. I knew it was the only company I’d leave Microsoft for.

I was HubSpot’s first engineering hire in Dublin so before getting started, Whitney and I needed to build out a team. I referred some friends, one from IBM, one from Microsoft, and another from Trinity College, and the four of us started together in 2013.

What types of problems are solving in your current role?

I’m the tech lead for Leadin, a light, freemium version of HubSpot. The biggest challenges we’re working on have to do with scalability of the app. We run JavaScript on all of our customers’ sites so we can collect information about their visitors, but it’s not just any JavaScript, it’s smart Javascript. Our API (built with Java/Dropwizard) dynamically returns different JavaScript for different sites and visitors. For example, Leadin has a lead capture popup form and if a visitor has already filled out the form, then we don’t run that code on the site. We’re currently serving 30 requests per second and get a form submission every 5 seconds. So, a big focus for my team is processing that data in our Kafka pipeline and scaling those requests.

What has it been like working on a startup within a startup project at HubSpot?

It’s been pretty wild. My team had about 8 months to rewrite the entire Leadin app on HubSpot’s infrastructure. Then at INBOUND, our CEO launched it at the keynote to huge applause. We could not believe that 15,000 professionals were going crazy over an app that a handful of 20-somethings built. We were just looking at each other in disbelief.

Tell me a little bit about the engineers on your team.

I’m extremely lucky to work with Kevin, Cian, and Graham. Kevin has this unending passion for tech and the product. A few months ago, he was frustrated by one of the key pieces of our form scripting tech so he reworked it over the weekend and then came in on Monday, showed it to me, and asked if he should keep working on it. I thought: You better keep working on this, this is incredible.

Cian started on the support team at HubSpot but quickly became driven to get into product development. After taking a Harvard programming course online, he worked on my team one day a week fixing bugs. You could tell immediately that he had the skills and passion to become an engineer so we gave him a full-time trial. He absolutely crushed it and we made him a permanent offer.

Then there’s Graham. I’ve never met another engineer who cares so much about the customer. He’s always asking questions about the customer experience and he refuses to ship bad UX, no matter how much I rush him sometimes.

What’s your favorite part of the Culture Code?

On one of the first slides, there’s a table that shows what the workplace used to be like and what it’s like today. Of the entire deck, the part that stood out most to me was the idea that employees used to focus on pension but now they’re focused on purpose. That struck a chord with me and I remember thinking HubSpot must be a great place to work if they recognize the pension vs. purpose shift and are actually using it to build their culture.

Learn more about our engineering opportunities in Dublin here.

Today, Eric Richard, HubSpot’s SVP of Engineering, was recognized as a Great Leader For All by Great Place to Work®. This award recognizes much more ...
Nadia Alramli (She/Her)
on Mar 5, 2020