Last year, our customers used HubSpot’s social software to share over 6 million posts on social media. Creating and publishing social content was a breeze but their feedback made it clear that gauging the impact of that content was more of a challenge. Customers didn’t just need data, they needed a tool to help them be better marketers, so we set out to build a social reporting solution. We launched Social Reports a few months ago and I wanted to share some insights from that process since data visualization can be a particularly tricky design challenge.

The first thing we took from our user research was that our customers needed social reporting that was immediately useful. Before Social Reports, there were a few ways customers could measure their social efforts with HubSpot. Inbox gave users real time updates on how their content was performing, Publishing showed how many clicks and interactions each message was getting, and Reach tracked how their social following was growing over time. All of this information was useful, but it was disjointed. Customers didn’t have a great solution for assessing their performance at a glance or showing their superiors, “Look, this is the impact our social efforts had this month.” Many spent hours combining multiple data sources into a spreadsheet and not surprisingly, this was a huge time suck. Research told us that whether a customer was a data-savvy marketer or had a phobia of numbers, both needed a faster way to compile and digest their social metrics.

The other challenge was that customers weren’t getting much actionable insight by looking at ton of chart junk. Were they getting fewer clicks because only a handful of messages have links? Were overall numbers down because they weren’t posting as often? Social reporting is about a lot more than numbers, it’s about context. Customers needed reports that would help them understand what’s working, what’s not, and what they should be striving for, so that they could use that information to improve their strategy.

These pain points led us to one key ingredient that we kept top of mind while building Social Reports: context. We were able to design a simple and intuitive—yet powerful—user experience by relying on a few contextual features that may come in handy next time you’re tasked with displaying data:

1. Default Compare View: We designed the default view of Social Reports to illustrate how customers’ social efforts are doing this month compared to last month. Now, instead of wondering “is 112 interactions good?” or “is 88 clicks a lot?”, customers have context around their metrics. They can easily change the time span, but this feature instantly puts numbers up against a relevant baseline. The user experience is much smoother now with Compare Time Frames because customers can assess their performance without touching a single filter or toggle.

2. Plain English: To make the reports more immediately useful, we added straightforward explanations of customers’ results. If a customer is outperforming their metrics from the previous month, “Your messages are performing better” makes that crystal clear. Of course, defining “better” is a whole other issue. Do total clicks and interactions need to increase? What if total clicks are up, but only because more content was published? All of this goes into how we frame their written explanation.

3. Percentiles: We introduced percentiles to show customers how their social media efforts compare to those of other HubSpot customers with a similar reach. This added yet another layer of context. Here’s an example:

The more context we can provide, the more insight our customer has when defining their social goals. 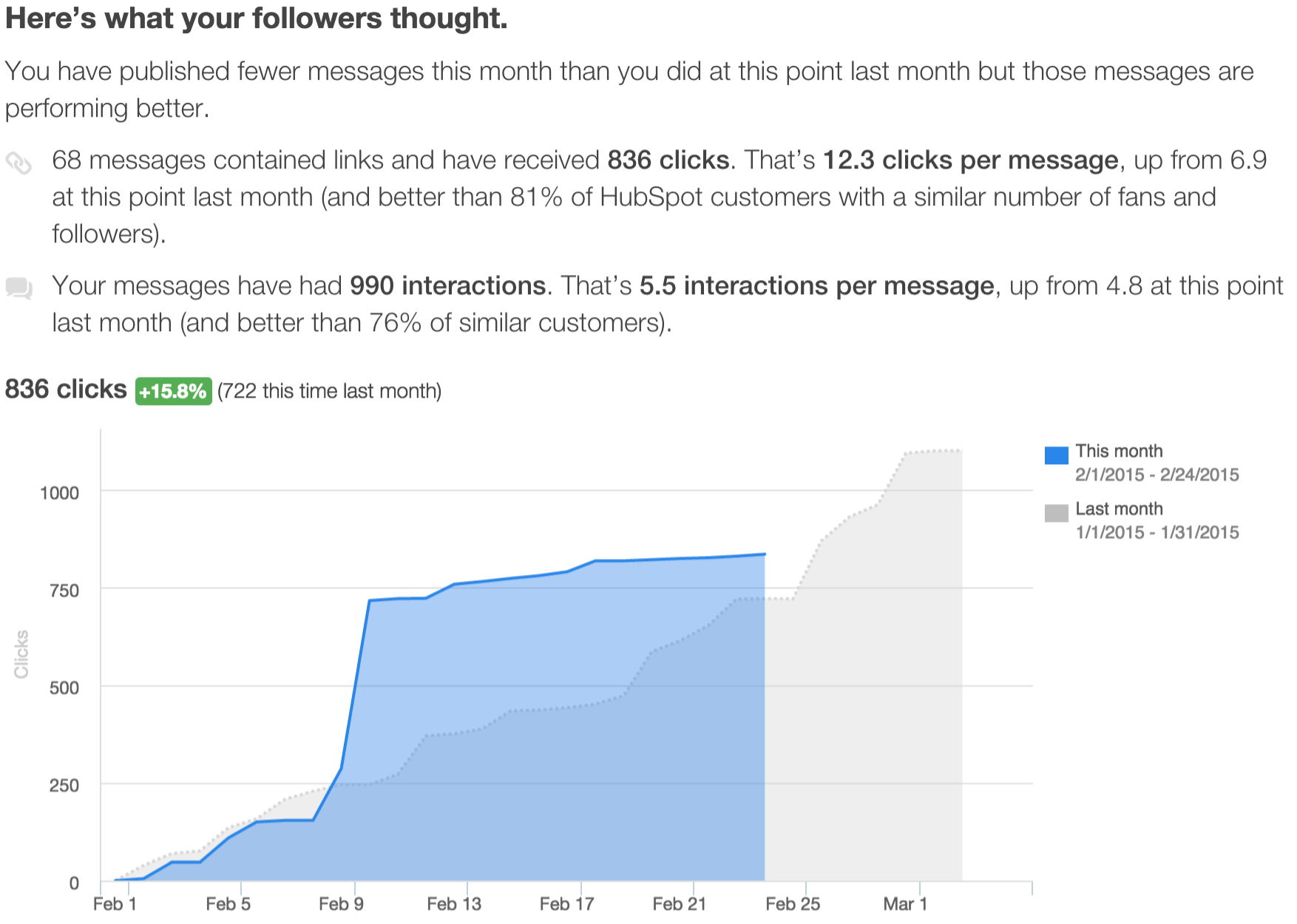 With these key features, we launched Social Reports into an extended beta for a couple months. During that time, we checked in with beta users (both those who were using the feature and those who were not), made updates based on user feedback, added polish based on our own usage, and fixed bugs. It was our largest team-wide effort since launching Social Inbox.

Now that Social Reports is available to our entire customer base, we can ask: did we create a social reporting solution that empowers our customers to be better marketers? Early returns point to yes. We’ve gotten feedback from customers that it’s now much easier for them to diagnose problems and fix their strategy accordingly, and that they have a high-level view of their performance that’s easy to grasp quickly. One customer said: “I basically wanted one view that can answer, ‘How is our social media working for us this month?’ I don’t want lots of detail. I want to know if our follower base is growing (and by how much) and whether people are engaging with the stuff we post. That’s it. Simple. And this report does that for me.”

Of course, like with every area of our app, the work is never done. Next, we’re focusing on showing customers which individual messages are contributing to social success. We’ve also heard feedback that users would also like to know what the best time of day is for them to publish content. As we collect more and more data, we can help our customers become even more successful by keeping context at the core.

How have you created a better user experience using context? Tell us in the comments!

If you’re a marketer, you want to show how you’ve helped move the needle for your business. You want to know what’s working, not just what’s ...
Dave Chen (He/Him)
on Apr 22, 2020
CultureEngineering

Joining HubSpot last August was exciting, but a bit nerve-wracking. I was coming in as a new Director of Engineering, and I had never done an embed ...
Brian Barbosa (He/Him)
on Mar 25, 2021
CultureProduct

Welcome to HubSpot, Rekindle!  We announced today that we acquired Boston-based social graph company, Rekindle. We’re beyond excited to welcome their ...
Brad Coffey (He/Him)
on Mar 24, 2015