Celebrating 2015, a Blockbuster Year for People and Products 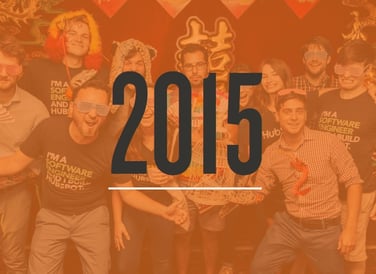 It isn’t hard for product people at HubSpot to agree on what the most important milestone of 2015 was. We spent months anticipating it, hours preparing for it, and days reflecting on the highs and the lows after it was over. That’s right, Star Wars: The Force Awakens was a defining highlight. But like many engineers, designers, and product leaders around the world, our development team has a lot to celebrate from the past year beyond the destruction of a third, even larger Death Star.

For starters, we welcomed a ton of new HubSpotters (read: Jedis) to the team. There are now over 170 people building, designing, and managing our software between Cambridge, MA and Dublin, Ireland. That's 69 newbies. New talent means new teams and new products. We introduced huge improvements and additions to our software (some were even introduced at the INBOUND conference in front of 15,000+ attendees) like the Ads Add-on, the Reporting Add-on, HubSpot Connect, and brand new content editors. While many of our dev teams were working on our marketing platform and growing our sales products, one team was working on a brand new tool to bring inbound to everyone: Leadin (which can best be described by Kevin's tweet here).

Of course, 2015 wasn't all software all the time. We rented a summer house in Cape Cod, spent four days in Texas at the Grace Hopper Celebration of Women in Computing, worked from a cottage in Ireland for a week, successfully consumed several 35 ft. italian subs, trolled each other (lovingly) on Slack, had a dance party with our customers, got to meet and learn from the creator of Kafka, mingled with over 500 attendees at Tech Talk at Night events, wore some very ugly sweaters at the December Science Fair, and got front row seats to a surprise kung-fu dance performance at our annual INBOUND Product Party.

To recap, here's a snapshot of some of our other favorite highlights, milestones, and moments from 2015:

All in all, it was a banner year for people, technology, and J.J Abrams. Thank you to our customers and the entire HubSpot team for making 2015 awesome.

To see what else HubSpot was up to in 2015, visit hubspot.com/move to see highlights from across the company.

8 Reasons to Co-op at HubSpot

1. Join an amazing team, build amazing things This one seems pretty obvious—HubSpot has an amazing product and co-ops have the good fortune to work ...
Allison, Molly, and Rose
on Jan 6, 2015
Culture

In the early days of HubSpot, a developer had worked nights and weekends to get a critical project to the finish line. Shortly after, he asked CEO ...
Hannah Fleishman (she/her)
on Jul 30, 2015

An Insider’s Guide to the Grace Hopper Celebration

The 2015 Grace Hopper Celebration is less than a month away and women from all over the country are getting ready to take over Texas, see as many ...
Rose DeMaio
on Sep 21, 2015