Platform companies like Facebook and Shopify are the product of fascinating evolutionary stories. Mark Zuckerberg wasn't thinking of AR/VR when he set up Facebook in his dorm room. He started with a simple directory to find college students on campus. Tobi Lutke probably didn't ever imagine spending $450 million dollars for an AI-powered fulfillment network when he started Shopify. All he wanted to do was figure out an easy way to sell snowboards online. Yet both founders created companies ⁠— platforms ⁠— that grew far beyond anything they ever imagined.

Today, Facebook’s market capitalization is just over $800 billion. Add the impact of Facebook across other major economic regions in the world — including the Americas — to Europe, Africa, and ASEAN.  The value of the economy around Facebook is worth far more than Facebook itself. 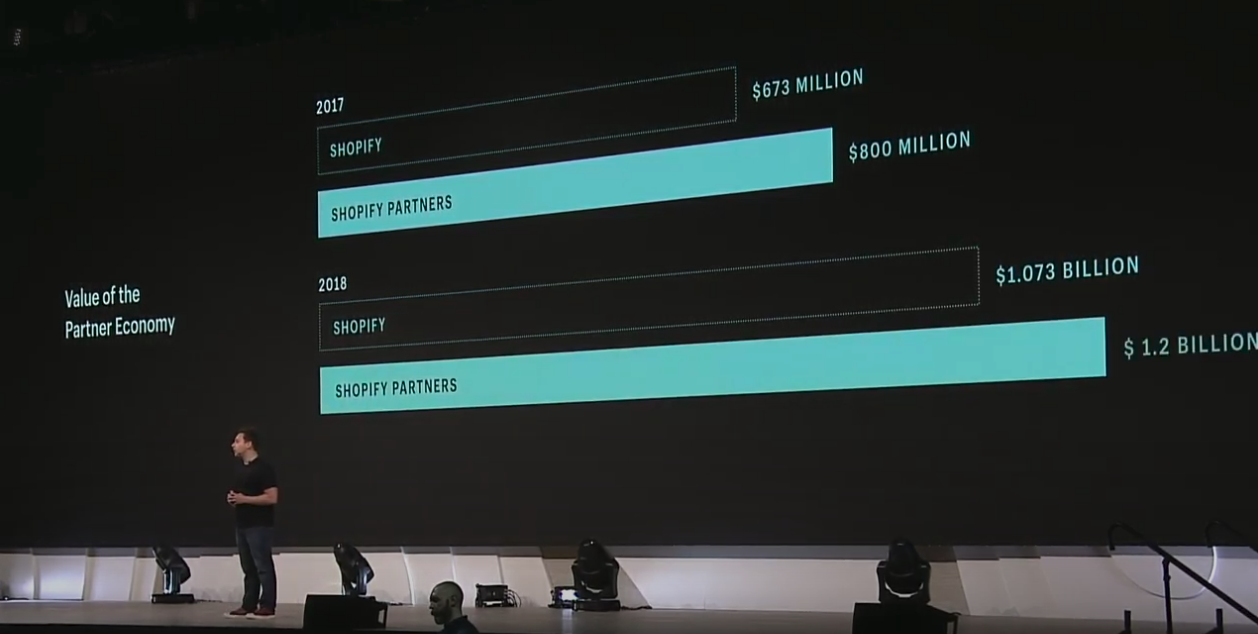 That’s economic impact in the financial sense. Let’s talk about job creation. In 2019 Shopify made $1.5 billion of revenue. That same year, Shopify estimated their partner ecosystem generated $6.9 billion. Over 80% of Shopify merchants use apps built by 3rd party developers. It took Shopify nine years to pay the first $100m to these app developers, but just one more year to reach $200m. If developer revenue growth is impressive, job creation growth is beyond impressive. Shopify employs over 5,000 people. The Shopify Partner Economy employs over 2.1 million people.

For Facebook and Shopify, their evolution from single product companies to platform economies is pretty much complete. Though it’s still early days, signs from this year suggest we're on a path toward building a similarly impactful platform economy around HubSpot.

According to a white paper from IDC, the global HubSpot partner ecosystem is projected to grow from $4.8 billion in revenue in 2020 to $12.5 billion in 2024. 34% of that revenue will come from add-on software. By 2024, $4.2 billion worth of add-on software will be purchased from the HubSpot ecosystem.

In early 2019, just a handful of what we now call “Ecosystem Entrepreneurs” had a place in the HubSpot App Partner program. Ecosystem Entrepreneurs are specialist creators building products that may not exist if HubSpot did not exist. They help us expand our “collective brain” beyond our core team at HubSpot, to understand customers and create niche solutions for them.

Today, more than 110 apps and integrations listed in the App Marketplace have been created by Ecosystem Entrepreneurs. These creators are increasingly diverse and increasingly global. In February 2021, the majority of newly-listed apps and integrations in the App Marketplace were built by partners based outside the United States. Ecosystem Entrepreneurs are building tools to help customers grow better with HubSpot, from all over the world.

Why are Ecosystem Entrepreneurs so good at understanding what customers need? Because many of them start their journey with HubSpot as customers.

OrgChartHub is one of my favorite examples of an Ecosystem Entrepreneur. In late 2019, Dan and Austin ⁠— OrgChartHub’s two founders ⁠— quit their day jobs to focus entirely on building apps for HubSpot customers. Those day jobs helped them learn about HubSpot ⁠— they’re power users ⁠— and this experience helped them understand innovation opportunities.

Dan and Austin didn’t need to be sold on HubSpot, or the App Partner opportunity. In fact, they saw a multitude of opportunities to create value for HubSpot customers. Their second app, GeoMapper, has already earned over 2,000 installs. That’s in addition to the 3,000 customers who have already installed OrgChartHub. Each app has earned mostly 5 star reviews. Each app has pricing plans and tiers that feel similar to ours. Both apps have “forever free” pricing plans.

In many ways, Facebook and Shopify share similarities with traditional economies like that of Ireland. Their employees lay the foundations of the economy, ensure services are run efficiently (most of the time), and ensure policies are equitable and fair. For Facebook and Shopify, “strategic partners,” like Stripe and Apple, are akin to multinationals. Relationships that create incremental value for everyone, but with an upper limit to the number that can be attracted to join the economy.

It’s the Ecosystem Entrepreneurs ⁠— the 70% ⁠— that pour fuel on the fire of economic growth, and help create better experiences and outcomes for everyone. The 2.1 million people directly or indirectly employed in the Shopify Partner economy are not all that different from those who work in coffee shops, hair salons, farms, and retailers across Ireland. They’re all specialists, and each one of them understands the needs, quirks, and nuances of their customers better than anyone else.

From citizens to entrepreneurs

In the same way that citizens of Ireland create small businesses within the country, Shopify and HubSpot’s app partners increasingly start out as customers. Customers of today are Ecosystem Entrepreneurs of the future. And each will experience a founder's “magic moment.”

When I started my first business in 2004, the biggest hurdle was the process of opening a merchant account. Getting to that “magic moment” ⁠— being able to collect money from customers online ⁠— took time. A visit to my bank, a meeting with the manager, sharing my business plan, and a long wait for approval. Today, that “magic moment” happens minutes after visiting Stripe.com.

For developers on Shopify, that “magic moment” is when an app is finally accepted into their marketplace. Because Shopify accepts payments on behalf of these creators, they're quite literally providing merchant accounts and removing friction from the process of creating an entirely new business on their platform. Even better, those “magic moments'' are shared on social channels like Twitter and Facebook, which, in turn, attracts more creators. The flywheel spins ⁠— and speeds up. 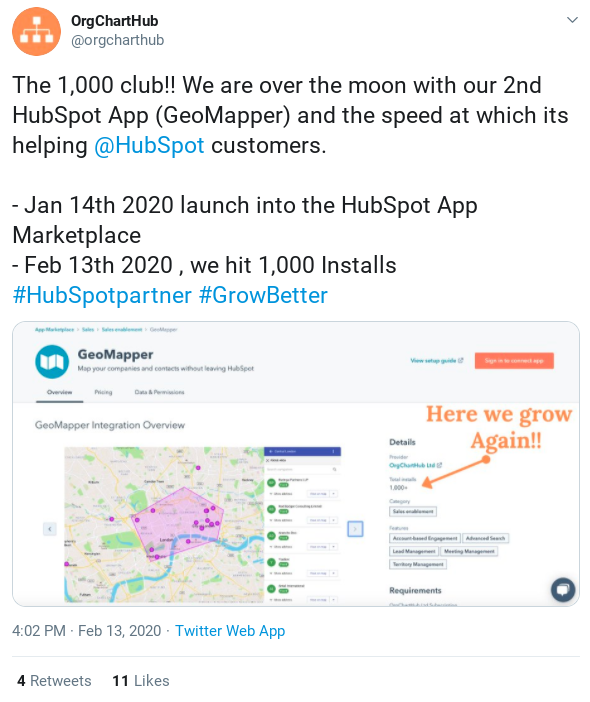 HubSpot’s Ecosystem Entrepreneurs share their “magic moment” with others on social channels like Twitter and Facebook, too. Earning attention⁠ — through the HubSpot App Marketplace⁠ — from over 100,000 HubSpot customers is clearly something worth shouting about.

With almost 700 apps and integrations listed today on the HubSpot App Marketplace, we're far closer to the beginning than the end of our journey to grow the HubSpot platform economy. And, though we can’t predict the innovative solutions our next 5,000 Ecosystem Entrepreneurs will create, there's one thing we can be hopeful about ⁠— that our platform economy will be as diverse tomorrow as our global customer base is today.

Interested in working with a team that's just as interested in how you work as what you're working on? Check out our open positions and apply.

HubSpot has been an Amazon Web Services (or AWS) customer for ten years now. Our footprint includes almost 2,500 EC2 instances, many petabytes of ...
Kerry Munz (She/Her)
on Feb 22, 2018
Engineering

Every organization holds certain values and beliefs that shape their culture. In the HubSpot Product org, we believe in moving quickly and iterating ...
Julie Nergararian (She/Her) & the HubSpot Frontend Platform Team
on Dec 16, 2019
Engineering

The other night, I was out having dinner with a former colleague of mine. We were catching up and trading war stories, and naturally my new role at ...
Ken Sykora
on Nov 9, 2022
Product

Hint: I'm trying to make it not so secret.
Christine Yoon (She/Her)
on Jan 7, 2021
CultureEngineering

Joining HubSpot last August was exciting, but a bit nerve-wracking. I was coming in as a new Director of Engineering, and I had never done an embed ...
Brian Barbosa (He/Him)
on Mar 25, 2021
EngineeringProduct