Hiring a diverse team is critical to building good software. The advantages of diversity apply to all teams, of course, but when you’re building software, having diverse perspectives in the room leads to a stronger product. Your customers aren’t homogenous, so why would your team be? More importantly, building a diverse team is simply the right thing to do.

Unfortunately, building diverse teams is something the tech industry has historically struggled with. At HubSpot, we’re no different. But we’ve decided to tackle this challenge using a unique approach: treating the problem like a customer problem.

What does that mean? For us, it’s using a data-driven approach to find gaps in our recruitment, hiring, and retention practices, and finding creative solutions. After all, not having a diverse team says more about your own sourcing practices than the actual talent out there. As HubSpot Product VP Andy Pitre says, “If we are truly hiring the best people, we’ll end up with a more diverse company, because talent is equally distributed. The issue is if we’re only hiring the best people we know.”

Here’s a look at some of the strategies we’ve implemented, what we’re working on now, and how you can tailor them to grow your own teams in an inclusive way.

Re-examine how candidates get their foot in the door

A year or two ago, If you applied to HubSpot for an engineering role, a recruiter would review your information and they’d decide whether or not to do a non-technical phone screen or decline to move forward. If you made it through the resume review and the phone screen, they’d then move you to an automated coding test, or right to an interview with our team.

As we reviewed applicants that we previously decided to pass on, something clicked: we were letting our biases do the filtering instead of giving applicants the chance to speak for themselves. In a lot of cases that meant we were looking for certain buzzwords or experience on resumes, or not giving fair opportunity to applicants with non-traditional backgrounds. At our scale, it’s impossible to have conversations with every single person who applies, so we needed something to help folks stand out, but our gut feeling wasn’t enough.

Our automated coding test is a straightforward web programming question that asks candidates to retrieve data, process it in some way, and post a response. It typically takes less than an hour to complete. We decided to run an experiment: instead of declining to move forward if a candidate doesn’t pass the resume review, send them the coding test. If they pass the test, continue on as normal. 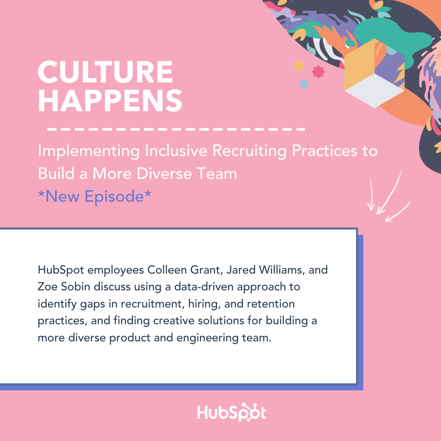 🎧 Listen to the episode

Almost immediately, we began interviewing and hiring applicants that we previously weren’t giving a second look. This shift in process was so successful that we now rely much less on resume reviews, and send most applicants through this process by default. There’s still room for improvement, but this was an important step in holding ourselves accountable, and not blocking the entrance for candidates based on our biases.

Re-examine how you interview

This part of our story begins with our co-ops. For the past few years, the team in charge of hiring for product internships at HubSpot has seen a significant increase in the diversity of incoming classes: majority minority groups with a growing percentage of female engineers. This year, we welcomed our first majority-female co-op class.

The question quickly became, how can we scale these results from the campus recruiting team to the whole org?

Enter slate interviewing. Over the years, as we evolved our campus recruiting process, we moved to conduct all of their interviews in consolidated batches, instead of spreading them out over weeks or months. They would see all of their candidates in a single week and then make a decision.

Instead of making decisions on a per-candidate basis, we’d wait until the end of the week, and then we would pick the best candidates and make offers to them. Doing this allowed us to have a consistent set of interviewers asking a consistent set of questions, who could compare candidates against one another and make determinations about which candidates were best. At the end of the week, when an interviewer had asked the same question to five or ten candidates, it was pretty easy for them to be able to identify which candidates performed best.

While we started this process with our co-ops and interns, it was natural to expand it to our new grads as well, and as of today, we’ve moved most of our hiring for all roles over to slates. As we’ve made this transition, candidate response has been positive. Not only do they receive a timely response about their application, they also receive the same preparation from recruiting and go through the same process as every other candidate, ensuring a level playing field.

For those unfamiliar with it, the Rooney Rule is simple: you must commit to interviewing diverse candidates for every leadership role that opens up in your organization. The iteration in effect at the NFL states ethnic minority candidates must be included in interviews for all open head coaching jobs. Most corporations adopting the rule for their own orgs, HubSpot included, specify that gender diversity must also be reflected in the mix.

Critically, this is not a mandate on whom to hire. It’s just that chances are, if you’re not following Rooney in your interview process, you’re self-selecting homogeneity. Seek out a diverse set of perspectives and then make your selections based on qualifications.

We started applying Rooney to all of our leadership positions, and now are expanding it to nearly all roles. As with our diverse class of incoming co-ops, the results have made it clear that if we’re not including gender-diverse and minority candidates in the interview process, we’re not always getting the best candidate for the job.

This directive might seem at odds with the speed at which recruiters are often under pressure to fill roles. There are times, though, when you truly need to go slow to go fast.

First, your recruiting team should pay attention to where they’re sourcing candidates from. Are you looking at companies with diverse workforces, and inclusion and belonging programs you admire? If you’re a campus recruiter, are you visiting schools with diverse student bodies?

Years ago a dominant part of our campus recruiting was based around our co-op programs (3-6 month student embeds within our company). We had great success with these programs and the handful of universities that offered them, becoming one of the employers of choice on their campuses. But as we took a step back, we realized that there were a relatively small number of schools that offered co-op programs, and we were substantially limiting the pool of students we could go after. So, we added internships into our mix. This allowed us to go after virtually any campus program. And it allowed us to choose schools that had great computer science programs and diverse student bodies.

Most importantly, you need to remember that recruiting is only half the equation. You need to build inclusion and belonging if you want to retain your new hires. A Catalyst study found that employees from minority groups are much more likely to leave a job if they don’t feel a workplace is inclusive.

Building inclusion is a process ⁠— you can’t just flip a switch. But there are some key elements that can help you make progress:

These steps will put you on the path to a more inclusive future team and product. At HubSpot, we’re far from done, but we’re in this for the long game. And remember, even if you don’t run a recruiting team or lead a product org, anyone has the power to contribute to diversity, inclusion, and belonging.

Listen to this and more episodes of Culture Happens on iTunes, Spotify, or Google Podcasts.

It takes a village to build a product. Not literally, of course; but the sentiment is the same. You need many different people in many different ...
Kelsey Dietz (She/Her)
on Aug 1, 2018
Product

When I started my career I couldn’t have told you what growth teams did, let alone imagine working on one of them. But as a founding member of ...
Chris Miller (He/Him)
on May 29, 2019