Name Dropping is a Q&A series that aims to elevate the stories of women and nonbinary people leading in the tech space. The idea came from Angela DeFranco, a VP of Product at HubSpot, who said one way to be better allies is to name drop more women and nonbinary people in discussions of achievement, inspiration, and disruptors in tech, instead of referencing, time and again, the same set of (often male) leaders.

When did you realize you loved engineering?

The crazy thing is that I didn’t fully fall in love with engineering until the last couple of years. During my second year of college, a family friend suggested that I take my first computer science class, and while I was originally reluctant, I gave in and agreed to take it. For the first time in my life, I struggled academically because it was so hard for me to change my way of thinking to fit how programming works. That first class kicked my butt, but I was intrigued and energized to conquer programming. Post-college, I struggled to gain confidence in the field and questioned if I should change fields altogether. But eventually I joined an amazing team, and it became clear that I wanted to continue to be an engineer. My team is composed of smart, yet kind, engineers who have helped me gain confidence in the skills I already had, as well as pick up new skills along the way. Over the past few years this confidence has fueled a new level of curiosity in engineering and has made me love the field more than I ever have.

You’re a senior software engineer at tech co., a platform that strives to increase civic engagement through technology. What are some of the most exciting or challenging projects you’re working on right now? 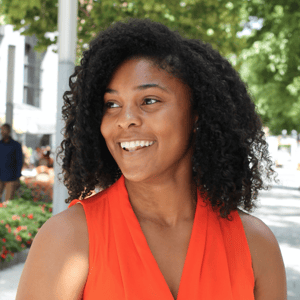 Working to fix democracy is a lofty goal (I know, shocker! Haha), but I’ve been enjoying thinking of ways we can make a more participatory democracy a reality and create a platform that users find intuitive and useful. I’m currently tech lead on a project that helps our users analyze their data sets and garner meaningful insights. It’s been exciting to learn about what data points are most useful to our clients, and brainstorm effective and efficient ways to complete this project. tech co. recognizes how blah the name is, but the name is merely a placeholder because we’re in “stealth mode.” While we’re in stealth mode we’re building the foundation of the platform that will be our future company. When the time is right, we’ll come out of stealth mode and reveal our full brand identity.

You co-founded Black Code Collective in 2016. Can you tell readers about the organization, and any ways they could get involved or support the initiative?

Myself and my co-founders started Black Code Collective after we became frustrated with being the only or one of only a few Black engineers at our jobs. The mission of BCC is to provide a safe space where Black engineers can collaborate on tech projects, grow their network, and feel at home. Being “the only” at your job can be incredibly isolating. Having a community of people who experience life in ways similar to you can be a way for you to recharge. If folks are interested in learning more, I’d suggest they check out https://blackcodecollective.com/. There they can find ways to join our Slack, donate, become a sponsor, or read our recently published Black Tech Workers’ Manifesto.

What advice do you have for women and nonbinary people pursuing STEM careers?

Strive to only work in places where you have psychological safety, and don’t let other folks in the industry chip away at your confidence. I struggled to gain traction in the beginning of my career, and now I realize the reason for that was a lack of confidence. STEM is a male-dominated industry (though this is shifting for the better), and folks won’t always treat you with respect if you don’t fit the mold of what they think an engineer should look like. But that’s their problem, not yours. Don’t let them make you doubt yourself. Never work at a place where you don’t have psychological safety ⁠— it will only stunt your growth. And remember that everyone was a beginner at some point in time.

What book do you think every engineer should read and why?

The Pragmatic Programmer. It’s a very popular book, and for good reason. It will change the way you attack problems and make you a more efficient programmer overall.

What is one quality that you think every leader should have in order to generate impact, and lead effectively?

Selflessness. A lot of people think that leadership is about doling out tasks, and while delegation is important, it’s only one piece of it. In my experience, leaders who are selfless are the most effective. They realize that the work/mission is bigger than themselves, and focus on empowering and uplifting their team instead of serving as an overlord in control of their worker bees.

Who’s one woman or nonbinary person in technology you’d like to name drop and why?

Please forgive me, I couldn’t pick just one. The first woman I’d like to name drop is Georgette Kiser. She started off as a Software Engineer, and until recently, she was the CIO of the global investment firm The Carlyle Group, helping to advise them on technical strategies. The second is LaBrina Loving. She’s a Senior Cloud Architect for Microsoft, and she works with Microsoft’s partners to help them figure out how to migrate and build solutions on the cloud.

What’s your go-to song to get yourself pumped up before a big presentation or event?

It very much depends on my mood, but it’s usually between Travis Scott’s “Highest in the Room” and Kings of Leon’s “Sex on Fire” (yes, I acknowledge this is a weird title for a pump up song lol, but how could you not get pumped listening to those guitar riffs?!)

Name Dropping is a Q&A series that aims to elevate the stories of women and nonbinary people leading in the tech space. The idea came from Angela ...
Francesca McCaffrey (She/Her)
on Dec 7, 2020
CultureUX

Name Dropping is a Q&A series that aims to elevate the stories of women and nonbinary people leading in the tech space. The idea came from Angela ...
Francesca McCaffrey (She/Her)
on Mar 10, 2021
CultureProduct

Name Dropping is a Q&A series that aims to elevate the stories of women and nonbinary people leading in the tech space. The idea came from Angela ...
Francesca McCaffrey (She/Her)
on Apr 9, 2021