We recently migrated hundreds of ZooKeeper instances from individual server instances to Kubernetes without downtime. Our approach used powerful Kubernetes features like endpoints to ease the process, so we’re sharing the high level outline of the approach for anyone who wants to follow in our footsteps. See the end for important networking prerequisites.

ZooKeeper is the foundation of many distributed systems, allowing them a powerful platform to rendezvous to take attendance and form clusters. Behind the scenes, it relies on a comparatively basic approach to forming clusters: each server instance has a config file listing all of the member hostnames and numeric ids, and all servers have the same list of servers, like this:

Each server has a unique file called myid to tell it which numeric id it corresponds to in that list.

Adding and removing hosts can be done as long as a key rule isn’t violated: each server must be able to reach a quorum, defined as a simple majority, of the servers listed in its config file. The traditional way to migrate a ZooKeeper server to a new instance involves, at a high level:

The downside of this approach is many config file changes and rolling restarts, which you might or might not have solid automation for. When we set out to move ZooKeeper to Kubernetes we started thinking about this approach, but figured out an easier way. Safer too, because in our experience each new leader election has a small risk of taking long enough to bring down the systems relying on them.

Our approach involves wrapping existing ZooKeeper servers in Kubernetes services and then does one-for-one server-to-pod replacements using the same ZooKeeper id. This requires just one rolling restart to reconfigure existing ZK instances, then shutting down the servers one by one. We won’t get into the weeds on the ways to configure Kubernetes topologies for ZooKeeper here, nor the low-level readiness checks, because there are many ways to do that with various pros and cons. The concepts discussed below work the same no matter the top-level topology.

For each of the steps below, we’ll include a diagram of our infrastructure topology. The diagrams will contain only two ZooKeeper instances for ease of understanding, even though one wouldn’t want to ever create a cluster with fewer than three.

Starting with a working ZooKeeper cluster, we’ll want to ensure that services on the host are capable of communicating with our Kubernetes cluster. We include a few ways to accomplish that at the end of this article. 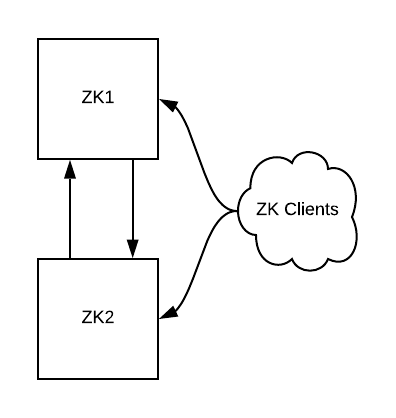 Figure 1: Our starting state. A two-instance ZooKeeper cluster and some clients

Create a ClusterIP service with matching Endpoint resources for each ZooKeeper server. They should pass the client port (2181) as well as the cluster-internal ports (2888,3888). With that done you should be able to connect to your ZooKeeper cluster via those service hostnames. Kubernetes ClusterIP services are useful here because they give you static IP addresses that act as load balancers to backend pods. In this case we're using them with a 1:1 mapping of service to pod so that we have a static IP address for each pod. 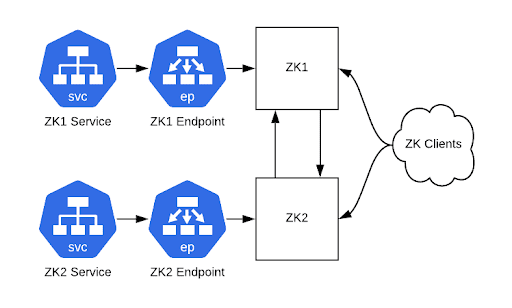 Figure 2: Our cluster, with ZooKeeper still on physical hardware, is reachable via ClusterIP Services 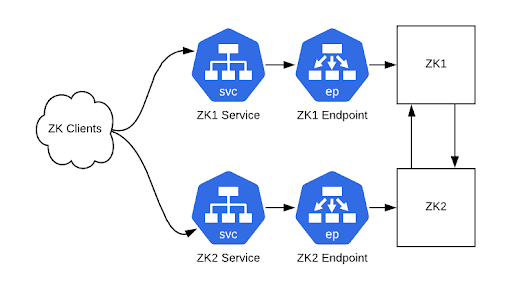 Next up, we’ll make our ZooKeeper servers do their peer-to-peer communication via those ClusterIP services. To do this, we’ll modify the config files to incorporate the addresses of the ClusterIP services. It’s also essential to configure the zk_quorum_listen_all_ips flag here: without it the ZK instance will unsuccessfully attempt to bind to an ip address that doesn’t exist on any interface on the host, because it's a Kube service IP. 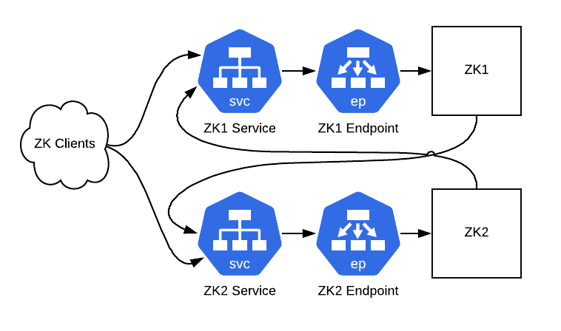 One server at a time we’ll do the following steps:

That’s it, your ZooKeeper cluster is now running in Kubernetes with all of the previous data. 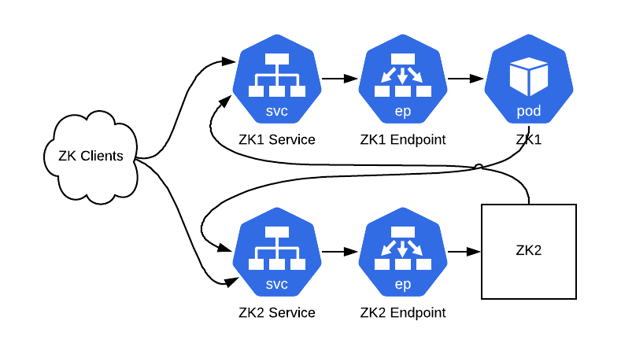 Figure 5: Cluster after one round of pod-replacement. ZK1 is now running in a pod without ZK2 knowing anything has changed

For these steps to work well, there’s some network setup to handle. You need to take steps to ensure the following:

An Introduction to Big Data

Big Data gained a lot of traction during the past ten years. You might have already heard about the MapReduce algorithm, seen the Apache Hadoop ...
Christoph Koerner (He/Him)
on Jul 14, 2020
CultureEngineering

Having a culture of posting messages and questions publicly provides many rewards. Encourage yourself and your teams to do so and you’ll see many ...
Robert Campion
on Oct 21, 2021
Engineering

This is the second installment of a five-part series about HubSpot’s year-long project to rework our platform for multi-region support. Check out the ...
Jonathan Haber (He/Him)
on Apr 21, 2022