I regularly get asked what my biggest challenges are or what keeps me up at night. For me, it’s making sure we attract and retain the right engineering leadership (who believe in our shared philosophy) so that they can support our rapidly growing team. When you are growing as quickly as we are, it is extremely important that you have leaders in place who can sustain the culture of excellence as we scale. A bad leader has a very high blast radius.

One of the solutions here is internal promotions. And we certainly lean in here, looking to cultivate our next generation of leaders and giving up and comers larger and larger opportunities to have an impact. But, it’s also important that we bring in leaders from the outside in order to foster a culture that brings in differences of opinion, background, and experience. So, how do we set them up for success and help them assimilate without putting undue pressure on them to succeed on day one? 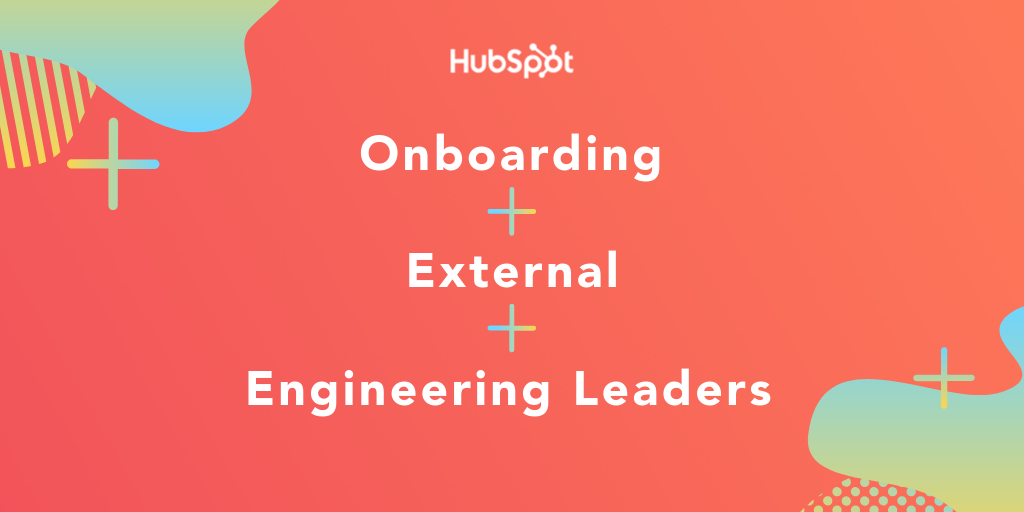 A few years ago, on one of our annual West Coast field trips, we asked several executives whether they hired external engineering leaders and, if so, how they onboarded them. They told us that they do hire external leaders… but… they do not put them in role on day one. Instead, they give them an extended period of time to get to know the organization, the culture, and the tech stack. While this makes sense initially, what’s the real ‘why’ behind it?

Say Kim comes in from another tech company and she immediately starts to manage and lead a team. Most likely, her leadership skills, and the software the team builds, will be in the style of her old company, not in HubSpot fashion. And not through any fault of her own, but because she was thrown into her role and not given the time and space to learn how we operate, how we build, and how we lead teams to success. Over time, you have enough Kims joining the leadership team building the way they know how to build, and HubSpot’s culture, core values, and foundation becomes misaligned and cracked. In addition, this doesn’t really set Kim up for success.  She’s not being given any opportunity to adjust her style and, therefore, its creating a really high barrier for her to get the trust and alignment with her teams.

So to avoid this potential pothole, every external engineering leader who joins the team goes through what we call an “Embedding Process” for the first several months at HubSpot. They are onboarded and treated just like any other engineer who joins the team taking the same training and going through the same onboarding project. Then, leaders start with a single “deep embed” where they focus on one single team for two to three months. This is a deep immersion where they are really learning the tech stack, the culture, the domain, etc. Then, they start to move toward more of a rotational model where they might spend one month or even just a few weeks moving from team to team learning the domain of that team. We’ve even started to do some rotations to other teams (ones they won’t be managing) if there are tight relationships between those teams.

To date, we’ve had a small but mighty group of leaders go through this process, and we’ve certainly learned a lot along the way. Here are a few lessons we’ve learned:

As people rise up through leadership, some strive to stay technical, stay close to the code and make a contribution. And one of the hardest things is to balance that passion that initially landed you a career in CS with the role of being a leader. Add on transitioning to a new company and having to learn a new tech stack without the time or space to do it, it becomes an impossible balancing act. Engineering leaders at HubSpot do both jobs: they are technical leaders and they are people leaders. This is thanks in part to this embed process.

So if the idea of spending six months close to the team, doing something a bit scary, but embracing that as a growth opportunity sounds exciting, we want to hear from you. Eric is HubSpot's SVP of Engineering.