Name Dropping is a Q&A series that aims to elevate the stories of women and nonbinary people leading in the tech space. The idea came from Angela DeFranco, a Director of Product at HubSpot, who said one way to be better allies is to name drop more women and nonbinary people in discussions of achievement, inspiration, and disruptors in tech, instead of referencing, time and again, the same set of (often male) leaders.

When did you realize you loved product management?

I didn’t really know that product management was a thing until my role evolved into that sphere. As a student, though, I fell in love with stage management. I did a lot of theater in high school and college, and found that stage management was the right role for me out of all of the different pieces of theater that I tried: acting, costumes, props. Stage management was where my propensity for organizing and getting everything to happen efficiently and figuring out which steps needed to happen to get from point A to point B really shone through. I’ve since realized a lot of those same ingredients go into product management. It’s just that when I was graduating college in 2008, I didn’t know very many people going into this field. Certainly it’s more of a thing now. I joined a team at athenahealth at the time that was called Process Innovation. And we were essentially doing product management for some of the internal tools that our operations team was using. It just wasn’t called that until the org evolved over time.

You have extensive experience working in the healthcare technology space, including your previous role as Senior Director of Product Management at PatientsLikeMe. What drew you to this field?

I really just wanted to do work that helped people. I needed to make sure that the work that I was doing was with products, services, and solutions that really made a difference in people’s lives, whether it was a better patient experience or a better diagnostic tool. Mission-based work is really important to me.

You’ve recently become Director of Carbon Product Management at Indigo, a sustainable agriculture company. What are some of the most exciting challenges your team is working to solve today? 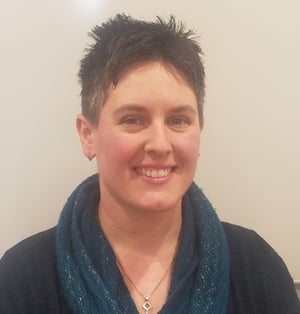 I think focus is always an important challenge of a Product team. There are always so many ideas and so many opportunities, but only so many resources to go around. I’m working with a product team that formed pretty recently, so I’m excited about helping them develop the tools and practices to do their best work and really collaborate well as a team and across the organization.

You served on the Board of Trustees for Olin College, your alma mater. What would you say to other women thinking about applying to similar positions?

Serving on a board, especially if it’s a board of a nonprofit or similar organization, is such a fantastic experience. And if you can get such an experience fairly early in your career, it can be super eye-opening. For me, it was a great way to make connections outside of the people whom I work with every day.

The board at Olin is comprised of business executives and presidents or past presidents of colleges, all sorts of leaders from various walks of life, so different people than I tend to interact with, and who are, on the whole, further along in their careers than I am, so just learning from them about how they think about a problem, or where they see risks on the horizon that I may not even be thinking about was really interesting. It helped me with being comfortable with leadership and executives and learning how to interact with them and talk with them in an appropriate and respectful way. I think that translates to other places where I’m working with people who are more senior and more experienced than I am. So that was fantastic. They’re really great people, so they’ve been good connections to have generally for life advice and networking, too.

It is a decent amount of work, though. So my advice would be to only take it on if you can devote the appropriate time to it. Especially for nonprofits, they’re really counting on their board members to be involved and active, so making sure you actually have the time to devote to it. I was on the board for four years, and I just ended my term back in October 2019, and for those four years it was a decent-sized extracurricular.

When you think about the best product managers you’ve worked with, what characteristics did they embody?

I think empathy is huge. You really need to be able to understand your users and feel what’s important to them. Not just what they’re trying to do, but where they are emotionally and what they’re thinking. What are they afraid of or excited about? That’s why curiosity is important, too. Wondering, why is it this way? Or what happens if we do this? How do other companies do things, even if they’re solving a totally different problem in a totally different industry?

Willingness to look outside your walls and be curious and then being unafraid to ask questions is an important mix. Part of the product manager role is gathering inputs from a variety of sources and understanding all the different perspectives. The engineering side, the design side, and the business context. You need to be someone who’s not hesitant to ask questions and risk sounding silly.

What is one quality that you think every leader should have in order to generate impact and lead effectively?

Authenticity. Being real with people is so important, and that really garners people’s trust and makes people want to engage with you and go along on whatever journey you’re on. That’s something I try to embody as much as I can. I think people can see it when you’re not authentic. So you have to be real, especially when things are tough. Authenticity is less important when everything is rosy. When things aren’t rosy, authenticity becomes all the more critical.

It’s also something that’s easier to convey in person, so leaders are facing this challenge now of how to convey your authentic self to your team and your peers while we’re only communicating remotely.

Who’s one woman in technology you’d like to name drop and why?

Brittney St. Germain. She’s been the VP of engineering at PatientsLikeMe for a little while — she just left. She’s a badass engineering leader and she can wrangle tough technology challenges but also tough people challenges. She’s super authentic, so you know that she’s being real. She doesn’t tip-toe around things, she’ll just tell you, this is the situation, and she’ll help you sort out what to do next.

What’s one book you think every leader should read?

Mindset by Carol Dweck is a really good one. And I think it’s a book not just helpful to workplace leaders but all leaders: coaches, scout leaders, parents. It’s a great framing of how, with some very simple language changes, you can either encourage people to really think about their growth, or to put themselves in a box. It really opened my eyes to how some of the words I thought were encouraging can actually be limiting, and how easily you can change certain phrases to help people to think in a growth-minded way.

For example, Dweck talks about celebrating the effort that someone’s put into a project as opposed to celebrating one of their characteristics. Instead of saying “You’re so smart to have done that,” say “You put so much effort into that.” If you put more effort in next time, you can reach a higher level, but if you’re hearing “You’re so smart,” then you have a metric you need to live up to each time: either you’re smart or you’re not. You don’t want there to be so much risk associated with failing — you can praise effort given whether or not a person succeeds or fails in the end.

What advice would you give your 22-year-old self?

Give yourself permission to explore and be curious. I think too often at 22 we think, I need to get on this path and follow it. I have a destination in mind and I’m going to follow these steps until I get there. In hindsight, rarely is anyone’s path that linear. It’s a series of winding roads, bumps and pivots and changes of course. My advice would be to take a more adventurous and exploratory approach to early jobs and learn from everywhere.

Name Dropping is a Q&A series that aims to elevate the stories of women and nonbinary people leading in the tech space. The idea came from Angela ...
Francesca McCaffrey (She/Her)
on Jun 10, 2020
CultureEngineering

Name Dropping is a Q&A series that aims to elevate the stories of women and nonbinary people leading in the tech space. The idea came from Angela ...
Francesca McCaffrey (She/Her)
on Jul 2, 2020
CultureProduct

Name Dropping is a Q&A series that aims to elevate the stories of women and nonbinary people leading in the tech space. The idea came from Angela ...
Francesca McCaffrey (She/Her)
on Jul 28, 2020