And I bet you have, too.

Think about your last Retro. (If you aren’t currently running Retros, you can learn more about frameworks, how to incorporate them into your team, and why they are important here.)

What was at the center of the conversation? Was it about team productivity? Did you talk about the health of the team? Did team members share how they were feeling?

Personally, I fell into the trap of too narrowly focusing on outcomes. I was wrong! As PMs, we are drilled to think about outcomes and one tool we use to drive better outcomes is running Retros. We use the Retro process to motivate and guide our teams to think about improving productivity. However, only optimizing for outcomes can be at the cost of team health. I now believe that the best teams put the same amount of effort into being massively productive as they do building a positive team culture.

Before, I (perhaps like you) made the same faulty assumption: I assumed that the best teams (and the ones I wanted to be a part of) were the ones that delivered the most value. This is true, but I missed an important element in my equation. I took the team out of teamwork. I assumed that a team that delivered high output meant that people understood the value and impact of their work, enjoyed working together, and felt challenged and fulfilled as individuals. I didn’t prioritize team health, because I thought it  would take care of itself. I no longer believe this to be true. A team delivering sustained value over the long term with a healthy dynamic requires an intentional focus on team health. 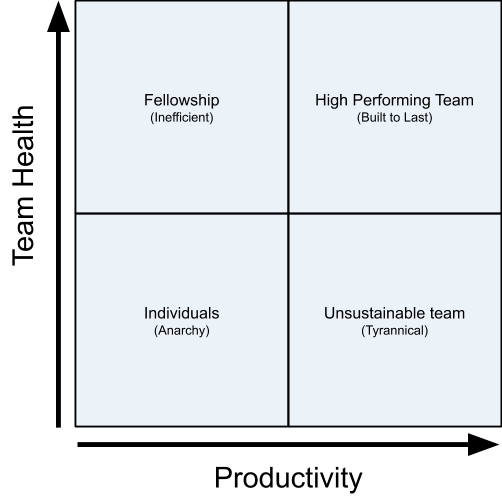 So how do you create or ensure you have a high-performing team that can weather the tests of time?

You can use a tool you already have: Retros! All it takes is 10 minutes, but it starts with unlearning some of the things you were taught early in your career. We are all taught that we should confront issues in a structured way so as to avoid making anyone feel like they are going to get punished or called out. This makes sense as it creates a psychological safe space so we can discuss bad processes or gaps in communication as a team in a calm and composed way.

However, it has one huge unintended consequence. It sterilizes a team’s humanity.  By directing the team to act professionally, we ignored the personal. We aren’t output-driven logic machines. We are people. We all have our own unique desires, motivations, and personal situations. Let’s lean into empathy and learn from each other, because that is what makes us stronger as a team.

Once you have established a safe, trustworthy environment for your team, I recommend leveling up your Retros and adding dedicated time to discuss team health. This is what I have started doing. At the end of each Retro, I have started asking the team to evaluate their team health on the following four factors:

Solving for motivation and connection

I have found that asking these questions has led to responses I never could have predicted. Top performers were suffering from a lack of motivation, which could have led to attrition if not addressed. In this example, by digging in and listening, we were able to tweak the way we do our planning sessions to better tie the big picture to the daily tasks. We now start our planning sessions with the three month vision instead of starting the meeting by discussing KPIs or team metrics. This motivates not only the individual contributor in question, but also the team as a whole.

We also heard during our new Retro process that teammates were feeling disconnected in these socially distant times. We used this feedback to create a space to brainstorm new ideas to connect us, especially with new team members. One of the ideas that resonated was Fun Fact Fridays. Now every Friday, people post riddles, brain teasers, or just random facts in Slack. This creates camaraderie and connection with each other that is beyond work or “shop talk.”

The importance of putting people first

We have found that the new information we are learning during Retros is helping the team address problems in small ways before there are major issues. Most importantly, we are doing this by putting people first. This has not only helped the team grow but also become closer as people. On a more personal note, I feel that talking to my teammates on a more personal level has helped me level up as an individual, as well.

So, during your next Retro spend 10 minutes to check in on your team's health. You won’t regret it. Remember: it’s possible to be part of a team that delivers both amazing outcomes and is in it together for the long haul.

Want to work with a team that puts team health and productivity first? Check out our open positions and apply.

In an engineering organization with many small teams, it’s important to develop technical leaders who can be both successful engineers and effective ...
Skyler Whorton
on Apr 12, 2016
Product

When I started my career I couldn’t have told you what growth teams did, let alone imagine working on one of them. But as a founding member of ...
Chris Miller (He/Him)
on May 29, 2019
Engineering

In order to reduce our data labeling needs, the AI Product Group at HubSpot is implementing an Active Learning based approach to choose samples from ...
Mukul Surajiwale (He/Him)
on Oct 6, 2020
CultureUX

When I greet HubSpot’s new hire classes each month, I tell them we’re known for having big, ambitious goals in service of our customers. Then I talk ...
Libby Maurer (She/Her)
on Oct 12, 2020
CultureEngineering

Every week at HubSpot, we put on an internal event called Tech Talk, where our engineers share all the latest about what they’ve been up to and their ...
HubSpot Product Team
on Dec 2, 2020
Product